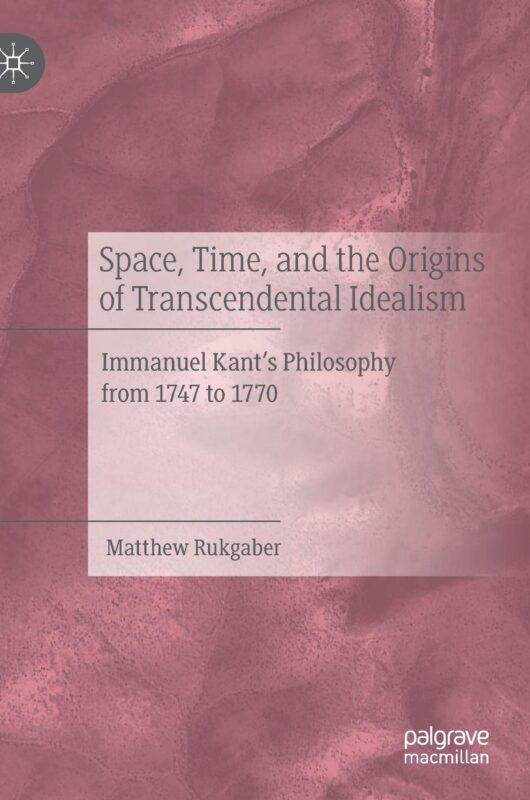 We are glad to give notice of the release of the book Space, Time, and Origins of Transcendental Idealism. Immanuel Kant’s Philosophy From 1747 to 1770 by Matthew Rukgaber (Palgrave, 2020).

This book provides an account of the unity of Immanuel Kant’s early metaphysics, including the moment he invents transcendental idealism. Matthew Rukgaber argues that a division between “two worlds”—the world of matter, force, and space on the one hand, and the world of metaphysical substances with inner states and principles preserved by God on the other—is what guides Kant’s thought. Until 1770 Kant consistently held a conception of space as a force-based material product of monads that are only virtually present in nature. As Rukgaber explains, transcendental idealism emerges as a constructivist metaphysics, a view in which space and time are real relations outside of the mind, but those relations are metaphysically dependent on the subject. The subject creates the simple “now” and “here,” thus introducing into the intrinsically indeterminate and infinitely divisible continua of nature a metric with transformation rules that make possible all individuation and measurement.

Introduction: An Overview of the Metaphysics of the Pre-Critical and Critical Kant

Space, Force, and Matter in the Early Natural Science Writings

Substances, Space, and Causality in the Early Metaphysical Writings

The Asymmetry of Space: Kant’s Theory of Absolute Space in 1768