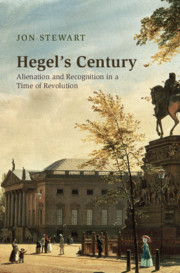 We are glad to give notice of the release of the volume Hegel’s Century. Alienation and Recognition in a Time of Revolution by Jon Stewart (Cambdrige University Press, 2021).

The remarkable lectures that Hegel gave in Berlin in the 1820s generated an exciting intellectual atmosphere which lasted for decades. From the 1830s, many students flocked to Berlin to study with people who had studied with Hegel, and both his original students, such as Feuerbach and Bauer, and later arrivals including Kierkegaard, Engels, Bakunin, and Marx, evolved into leading nineteenth-century thinkers. Jon Stewart’s panoramic study of Hegel’s deep influence upon the nineteenth century in turn reveals what that century contributed to the wider history of philosophy. It shows how Hegel’s notions of ‘alienation’ and ‘recognition’ became the central motifs for the era’s thinking; how these concepts spilled over into other fields – like religion, politics, literature, and drama; and how they created a cultural phenomenon so rich and pervasive that it can truly be called ‘Hegel’s century.’ This book is required reading for historians of ideas as well as of philosophy.