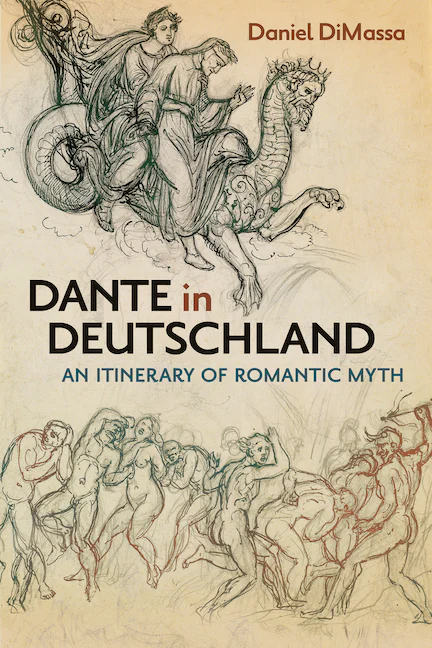 We are glad to give notice of the release of the book Dante in Deutschland: An Itinerary of Romantic Myth, by Daniel DiMassa (Bucknell University Press, 2022).

Around the turn of the nineteenth century, no task seemed more urgent to German Romantics than the creation of a new mythology. It would unite modern poets and grant them common ground, and bring philosophers and the Volk closer together. But what would a new mythology look like? Only one model sufficed, according to Friedrich Schlegel: Dante’s Divine Comedy. Through reading and juxtaposing canonical and obscure texts, Dante in Deutschland shows how Dante’s work shaped the development of German Romanticism; it argues, all the while, that the weight of Dante’s influence induced a Romantic preoccupation with authority: Who was authorized to create a mythology? This question—traced across texts by Schelling, Novalis, and Goethe—begets a Neo-Romantic fixation with Dantean authority in the mythic ventures of Gerhart Hauptmann, Rudolf Borchardt, and Stefan George. Only in Thomas Mann’s novels, DiMassa asserts, is the Romantics’ Dantean project ultimately demythologized.