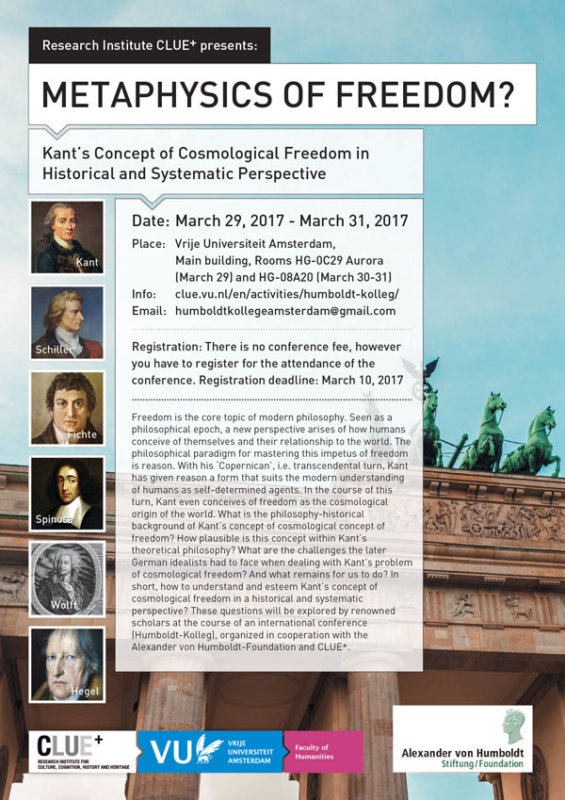 We are glad to remind you that the conference Metaphysics of Freedom? Kant’s Concept of Cosmological Freedom in Historical and Systematic Persperctive will be held at Vrije Universiteit Amsterdam on March 29-31 2017.

Freedom is the core topic of modern philosophy. Seen as a philosophical epoch, a new perspective arises of how humans conceive of themselves and their relationship to the world. From now on, human thought and action is not held to be determined by external factors (heteronomy) anymore but self-determined (autonomy), and hence freed from external factors as grounds for its determination. The philosophical paradigm for mastering this impetus of freedom is reason. With his ‘Copernican’, i.e. transcendental turn, Kant has given reason a form that suits the modern understanding of humans as self-determined agents. Reason transpires to be the source of all validity, of any normativity of human though and actions. Objectivity, whichever, is from the start framed by the conditions of reason, or as it is also called in the discourse, of ‘subjectivity’.
The German idealists were, on the one hand, thrilled by this thought. On the other hand, however, Kant’s elaboration of the idea of transcendental philosophy did not really convince them. Regardless of whether Reinhold, Fichte, Schelling, or Hegel: they all were of the opinion that Kant’s transcendental turn has unfettered a revolution in philosophical thought that should not so much be stopped but that rather should be completed. It should be completed by addressing critically the presuppositions or ‘foundations’ of Kant’s philosophy itself.

To these presuppositions belongs, without doubt, Kant’s architectonic of reason in general as well as the role the concept of freedoms has within it in particular. The adventure of exploring Kant’s presuppositions indeed from the start gave wings to the development of German idealist philosophy. The unity of reason now is to be conceived of as freedom. Already Fichte qualified, with revolutionary pathos, his Wissenschaftslehre (1794) as “the first system of freedom.” And Hegel, as it seems in the most radical fashion, tried to conceive of reason and freedom as a unity from which everything else emerges and can be comprehended. Whereas for Kant freedom is not so much the origin of all philosophy and being but the “capstone” of the whole system of pure reason, for Hegel freedom makes up the beginning, the way, and the end of philosophy.

Kant’s architectonic of reason forms the starting point of the German idealist attempt a perfecting Kant’s transcendental philosophy. Referring to the history of philosophy, Kant divides philosophy continuously into theoretical and practical philosophy and the objects which correspond to this division into nature and freedom. This reference to the history of philosophy, for Kant especially present as the so called German Schulphilosophie, i.e. the German metaphysics of his age, moreover informs basic characteristics of Kant’s concept of freedom. For Kant, freedom is a causal power. In the third antinomy of his Kritik der reinen Vernunft, Kant models freedom, in first instance cosmological freedom and subsequently and based on it practical freedom, as “capacity (power)” to be a “cause of effects”, more precisely, to initiate a series of effects “spontaneously”. This modelling according to powers of consciousness enables it, and this is essential for Kant who already in a cosmological context lets freedom “in the practical” take the center stage, to understand humans as the agents of their action: not merely as effects of a natural causality, not as mere objects but as subjects.

It is this radical turn in the concept of freedom that motivates the present Humboldt Kolleg and the research questions that guide it. The Humboldt Kolleg puts Kant’s concept of cosmological freedom into the center. Hence, it explicitly is not primarily bothered with Kant’s concept of practical freedom, discussed frequently in contemporary debates. In contrast, it concentrates on the much less addressed and mostly taken for granted cosmological foundation of it.

In short, how to understand and esteem Kant’s concept of cosmological freedom in a historical and systematic perspective? By elaborating on this question, the Humboldt Kolleg takes up the contemporary interest in Kant and freedom as well as that for Kant’s philosophical predecessors and attempts at a reactualization of German idealists.

Languages of the conference: English and German.

The full program of the conference can be found here.