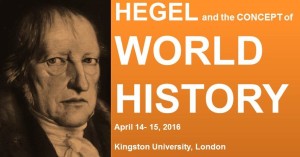 A call for abstract  has been opened. The deadline for submissions is 29 November 2015.

Below you can find some general information from the text’s call:

Objektiver Geist occupies an intermediary position in the general context of Hegel’s system. It was, however, a late “discovery” encountered in a double exteriority, both outside the subjective and separate from absolute spirit. Hegel’s passion for the objective led to numerous returns to the system’s middle term to rework and update its content. When this effort was interrupted by the philosopher’s death, the first Hegelians took up the challenge to furnish the system’s middle grounds with the philosophy of history and other posthumous fragments of teaching or early writings. If the Hegelian concept of objective spirit was developed on the grounds of history, rather than political economy, is the concept itself subject-specific? What does it cover, designate, constrain, impose, or conceptualize? Is objective spirit still to be thought there, where it imposed itself on Hegel, on the first Hegelians, and on later ones (Left, Right and Center)?

This conference seeks to address questions arising from the concept of world history in relation to the form, function, and content of objective spirit as presented in the Encyclopedia of the Philosophical Sciences and Elements of the Philosophy of Right.

We welcome paper proposals and panel suggestions in the following broad questions:

2-    Actualisations: social and political institutions – historicity of institutions, institutions as objective reason and their manifestations in the becoming of history.

3-    Objective spirit and its interpretations: how it has been tempered or distorted by critical interventions – positivism, sociologism, philosophies of language, social and political sciences, political economy, historicism, hermeneutics. Uses and misuses of dialectical totality and collective consciousness.

4-    Objective spirit as world-history: rationality of the real (speculative v. descriptive), effectual reality and becoming reality; effective reality and the future of history; relations to modernity.

5-    Religion, politics, and history: religion, modernity, secularization; state and religion; the art; the age of globalization; world history and the history of religions.

Please email paper abstracts (no longer than 500 words) and panel proposals for blind review by 29 November 2015 to hegelab@uniupo.it

For the PDF version of the call, please click here.