We are pleased to give notice of the inaugural issue of the journal Symphilosophie. International Journal of Philosophical Romanticism.

SYMPHILOSOPHIE is an online, open-access and peer-reviewed journal for new academic research on philosophical romanticism.

Below, you can read the table of contents of the issue and a brief description of the journal.

You can find the Editorial Board at this link. Here, you can find a call for papers for the second issue on The Women Writers of Philosophical Romanticism.

For further information, please visit the website of the journal.

The journal SYMPHILOSOPHIE is above all placed under the banner of the philosophy of Frühromantik, or Early German Romanticism. Accordingly, the authors especially to be treated are the principal thinkers of romanticism: Friedrich Schlegel, August Wilhelm Schlegel, Novalis (Friedrich von Hardenberg), as well as philosophical writers like Hölderlin, Friedrich Schleiermacher, August Ludwig Hülsen, Ludwig Tieck and K. W. F. Solger. These thinkers are to be considered from the different philosophical perspectives present in their works: e.g. in terms of epistemology, metaphysics, nature, ethics, aesthetics, anthropology, history, politics, religion, and so on, and/or in relation to other philosophical streams and figures such as Plato, Spinoza, Kant, Fichte, Herder, Hemsterhuis, Schelling, Hegel etc. SYMPHILOSOPHIE also accords an important place to the writings of the female thinkers of romanticism, including among others: Caroline Schlegel, Dorothea Veit, Karoline von Günderrode, Sophie Mereau, Bettina von Arnim, or Madame de Staël.

In the spirit of the transdisciplinary and interdisciplinary work that is one of the hallmarks of romanticism, submissions to SYMPHILOSOPHIE could also concern European romanticism and analyses beyond the frontiers of philosophy as such, i.e. interconnections with literature, linguistics, the arts, music, medicine, or geology. Nevertheless, the research should still have some kind of relationship to philosophy.  SYMPHILOSOPHIE also publishes articles dealing with the historical reception of philosophical romanticism or the relation of this intellectual current to contemporary figures and movements.

The journal has four main sections: 1). original research articles and review-essays; 2). book reviews; 3). new translations; 4). events and notices (conferences, research seminars etc.). In this regard, the journal not only sees itself as a forum for publishing high-quality research on philosophical romanticism, but also offering an overview of the latest publications, events, and editions in this domain.

As an international journal, SYMPHILOSOPHIE accepts articles, book reviews and translations in the English, French, German or Italian languages. The journal particularly welcomes scholarly research that returns to the original sources, while critically taking into account the secondary literature.

Publication will begin at a rate of one issue per year. 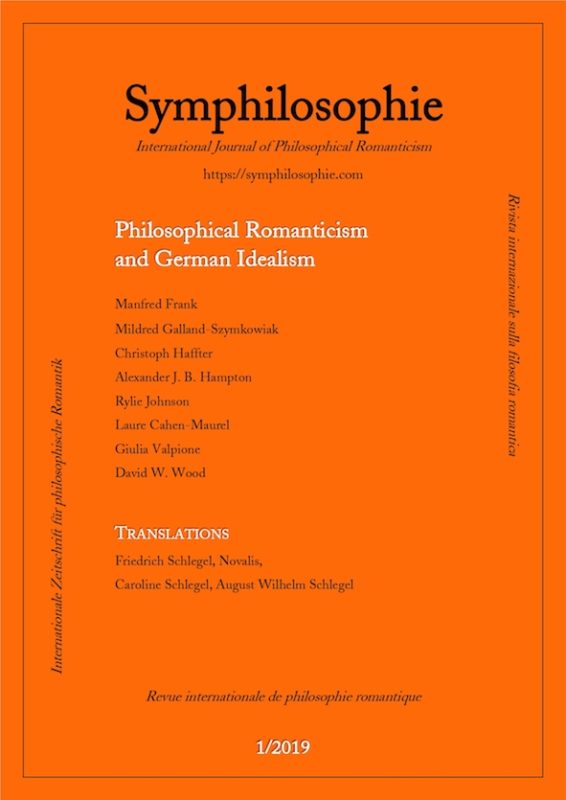