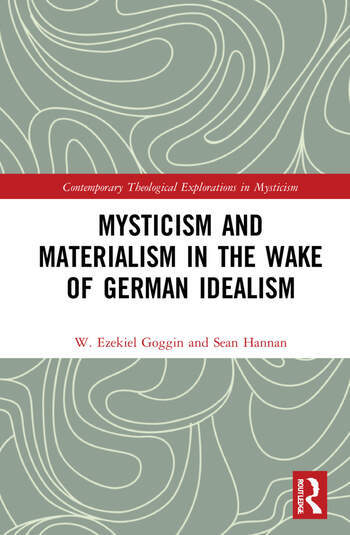 We are glad to give notice of the release of the volume Mysticism and Materialism in the Wake of German Idealism, edited by W. Ezekiel Goggin and Sean Hannan (Routledge, 2022).

This book argues that the rediscovery of mystical theology in nineteenth-century Germany not only helped inspire idealism and romanticism, but also planted the seeds of their overcoming by way of critical materialism. Thanks in part to the Neoplatonic turn in the works of J. G. Fichte, as well as the enthusiasm of mining engineer Franz X. von Baader, mystical themes gained a critical currency, and mystical texts returned to circulation. This reawakening of the mystical tradition influenced romantic and idealist thinkers such as Novalis and Hegel, and also shaped later critical interventions by Marx, Benjamin, and Bataille. Rather than rehearsing well-known connections to Swedenborg or Böhme, this study goes back further to the works of Meister Eckhart, Nicholas of Cusa, Catherine of Siena, and Angela of Foligno. The book offers a new perspective on the reception of mystical self-interrogation in nineteenth-century German thought and will appeal to scholars of philosophy, history, theology, and religious studies.

1 The Spark and the Counterfeit: Kant, Fichte, and the Transcendental Critique of Mysticism

2 In the Vein of Eckhart: Franz Xaver von Baader’s Mining of Medieval Mysticism

4 The Eye With Which I See: All-Seeing Eyes in Hegel, Eckhart, and Nicholas of Cusa

5 Social Grace: Eckhart, Catherine of Siena, and Marx on Appropriation

6 A Dramatic Loss of Self: Bataille’s Mystical Praxis