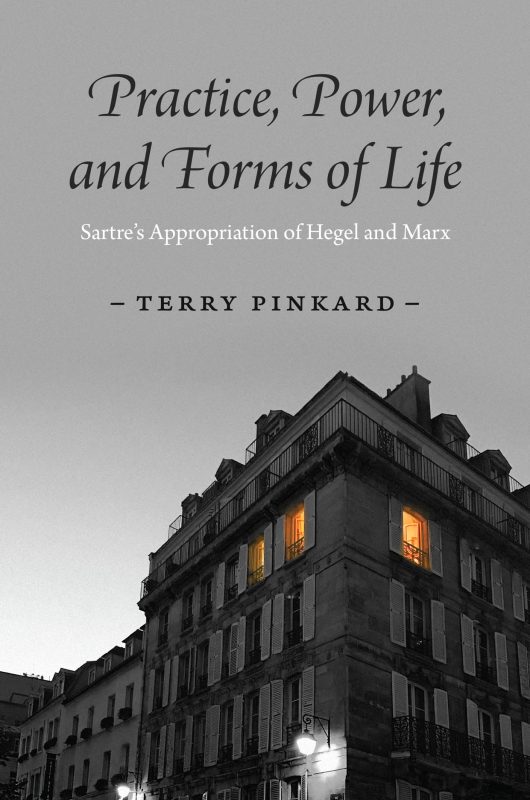 We are glad to give notice of of the release of the volume Practice, Power, and Forms of Life: Sartre’s Appropriation of Hegel and Marx by Terry Pinkard (The University of Chicago Press, 2022).

Jean-Paul Sartre’s Critique of Dialectical Reason, released to great fanfare in 1960, has since then receded in philosophical visibility. As Sartre’s reputation is now making a comeback, it is time for a reappraisal of his later work. In Practice, Power, and Forms of Life, philosopher Terry Pinkard interprets Sartre’s late work as a fundamental reworking of his earlier ideas, especially in terms of his understanding of the possibility of communal action as genuinely free, which the French philosopher had previously argued was impossible.
Pinkard reveals how Sartre was drawn back to Hegel, a move that was itself incited by Sartre’s newfound interest in Marxism. Pinkard argues that Sartre constructed a novel position on freedom that has yet to be adequately taken up and analyzed within philosophy and political theory. Through Sartre, Pinkard advances an argument that contributes to the history of philosophy as well as key debates on action and freedom.

Below is the Table of Contents of the volume:

Preface
1 Spontaneity and Inertia
1. The Background: The Form of the “I”
2. “I” and “We,” Singular and Plural
3. “I,” “You,” and the “Other”: Dialectical Thought
4. Being Together: “We”
5. Alienation in Inertia
6. Reciprocity in Spontaneity and Reciprocity as Antagonism
2 Spontaneity’s Limits
1. Tragic Counter-Finality
2. Practical Identities, Singular and General: Differing Conceptions of “We”
3. Spontaneity within the Revolt of the Oppressed: The Spontaneous “We”
4. Actualized Freedom’s Fragility in the Myths of Self-Authorization
5. Violence in the Enforcement of Norms
3 Ethics in Politics
1. Rules, Groups, and Functionalist Ethics
2. Active, Passive, or Neither?
3. Humanism and Humanisms
4. System versus Subjective Life
5. Self-Knowledge in the System
6. Ethos
7. Ethos, Inequality, History
8. What Follows Marxism?
9. Liberty, Equality, Fraternity, Colonialism, Racism
10. Morals on Holiday
11. Power, Practice, Practico-Inert
Dénouement
Acknowledgments
Notes
Bibliography
Index