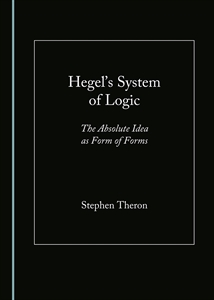 We are glad to give notice of the release of the book Hegel’s System of Logic: The Absolute Idea as Form of Forms by Stephen Theron (Cambridge Scholars Publishing, 2019).

In the Lectures on the Proofs of the Existence of God, prepared just before his death, Hegel states that the question of proving God can receive its “scientific” treatment in the (Science of) Logic and nowhere else. He also states that Logic, at least his logical system, is the same as that of metaphysics. Here, everything finds its place in relation to everything else. This book presents a total system in the light of which everything, from physics to theology, finds its place and true presentation. It chiefly follows, in textual citation, the later, more concise version (as Part One of the Encyclopaedia of the Philosophical Sciences) of Hegel’s two presentations of this science. The stress has been on showing God’s own thought, or that of the cosmos, with which all mind is as such in unity. Logic and its forms, Hegel claims, is and are “the form of the world”. This ultimate objectivity, therefore, is at once utter subjectivity. The opposition collapses.

The method here has been simply to follow the logic’s own development of thought (a development from within which Hegel himself calls its only method), to allow it once more to run its course rather than to merely “comment” on it, as if from a superior standpoint.

In this work on Logic specifically, therefore, the intention is not to substitute one religion for another, as so many scholars, such as Charles Taylor, interpret Hegel as doing. Rather, it stakes out the path for specifically theological development as its ecumenical absorption into sophia, into the Idea as “all in all”, into the pure theology or wisdom of the ecumenical “Church”. One stakes this out, not in a “reduction” to philosophy, but in the re-establishment of metaphysics as itself the true theologia, the mind of heaven. What else could philosophy meaningfully be, unless “understanding spiritual things spiritually”, the being led into all truth, perched on the shoulders of those going before?