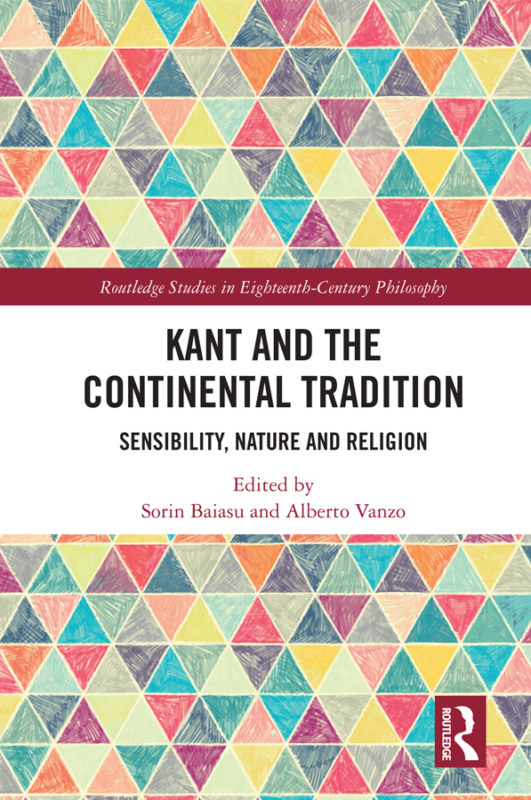 We are pleased to give notice of the release of the volume Kant and the Continental Tradition. Sensibility, Nature and Religion, edited by Sorin Baiasu and Alberto Vanzo (Routledge, 2020).

Immanuel Kant’s work continues to be a main focus of attention in almost all areas of philosophy. The significance of Kant’s work for the so-called continental philosophy cannot be exaggerated, although work in this area is relatively scant. The book includes eight chapters, a substantial introduction and a postscript, all newly written by an international cast of well-known authors. Each chapter focuses on particular aspects of a fundamental problem in Kant’s and post-Kantian philosophy, the problem of the relation between the world and transcendence. Chapters fall thematically into three parts: sensibility, nature and religion. Each part starts with a more interpretative chapter focusing on Kant’s relevant work, and continues with comparative chapters which stage dialogues between Kant and post-Kantian philosophers, including Martin Heidegger, Hannah Arendt, Jean-François Lyotard, Luce Irigaray and Jacques Derrida. A special feature of this volume is the engagement of each chapter with the work of the late British philosopher Gary Banham. The Postscript offers a subtle and erudite analysis of his intellectual trajectory, philosophy and mode of working. The volume is dedicated to his memory.