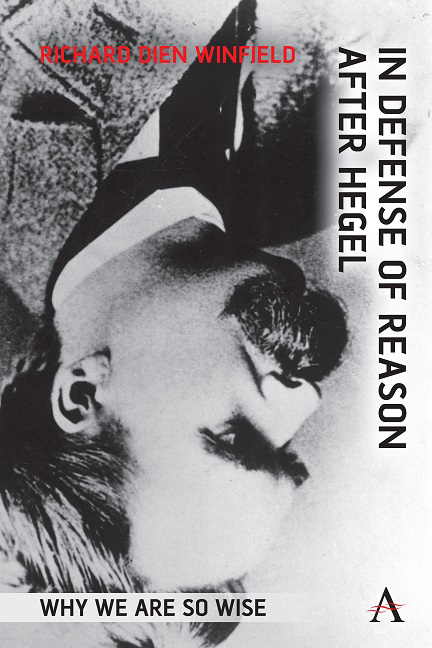 We are glad to give notice of the book In Defense of Reason after Hegel. Why We Are So Wise by Richard Dien Winfield (Anthem Press, 2022).

From the publisher’s webiste:

In Defense of Reason after Hegel builds upon and enlists the arguments of Hegel to refute the disempowerment of reason perpetrated by the peddlers of misinformation in public life and by analytic philosophy and postmodernism in the academy. Undermining their assaults on truth, this book shows how the fundamental character of nature and of mind allow reason to be autonomous and allow us to enact a reality of freedom in accord with right and freely create works of fine art.

The book examines how life and language provide the means for reason to be autonomous and how the autonomy of thought precludes natural evolution or bioengineering from enhancing our capacity for philosophical thinking. It unravels the perplexities of the logic of self-determination and to show how the will can achieve self-determination in the conventions by which agents engender the institutions of freedom. The book then unveils the limitations of the principle of contradiction, which bars the way to an understanding of how anything can be determinate and how thought and action can be free. The book also draws upon Hegel’s Philosophy of Mind to show how language can originate and be an appropriate vehicle of autonomous reason.

Acknowledgments
Introduction
1 – Why We Are So Wise: Hegelian Reflections on whether Reason Can Be Enhanced
2 – Self-Determination in Logic and Reality
3 – Hegel’s Overcoming of the Overcoming of Metaphysics
4 – On Contradiction: Hegel versus Aristotle, Sextus Empiricus, and Kant
5 – Overcoming Actuality: How Hegel Frees Us from the Prison of Modality
6 – Time and Reason
7 – Hegel and the Problem of Consciousness
8 – Hegel and the Origin of Language
9 – The Logic of Right
10 – A Dream Deferred: From the US Constitution to the Universal Declaration of Human Rights
11 – World Spirit on the Campaign Trail in Georgia: Can the Philosophy of Right Be a Guide to Social Reform?
12 – The Classical Nude and the Limits of Sculpture
Bibliography
Index