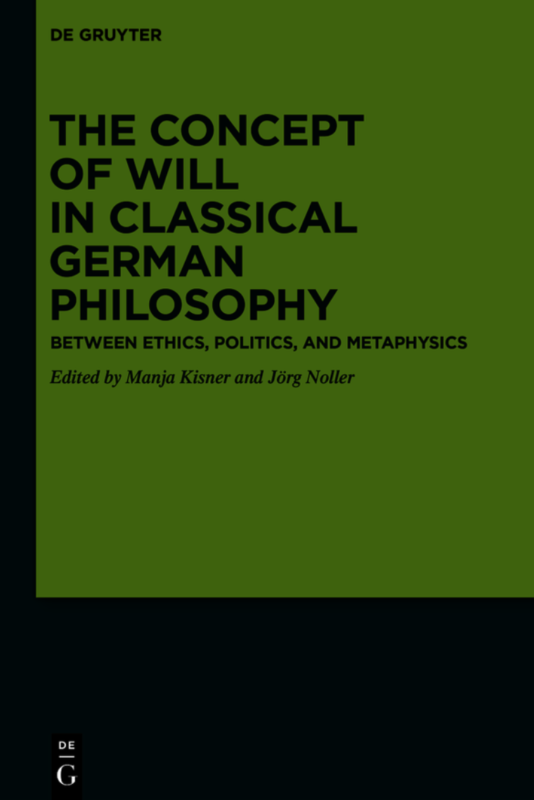 We are pleased to give notice of the release of the volume The Concept of Will in Classical German Philosophy. Between Ethics, Politics, and Metaphysics, edited by Manja Kisner and Jörg Noller (De Gruyter, 2020).

This volume collects thirteen original essays that address the concept of will in Classical German Philosophy from Kant to Schopenhauer. During this short, but prolific period, the concept of will underwent various transformations. While Kant identifies the will with pure practical reason, Fichte introduces, in the wake of Reinhold, an originally biological concept of drive into his ethical theory, thereby expanding on the Kantian notion of the will. Schelling, Hegel, and Schopenhauer take a step further and conceive the will either as a primal being (Schelling), as a socio-ontological entity (Hegel), or as a blindly striving, non-rational force (Schopenhauer). Thus, the history of the will is marked by a complex set of tensions between rational and non-rational aspects of practical volition. The book outlines these transformations from a historical and systematic point of view. It offers an overview of the most important theories of the will by the major figures of Classical German Philosophy, but also includes interpretations of conceptions developed by lesser-studied philosophers such as Maimon, Jacobi, Reinhold, and Bouterwek.