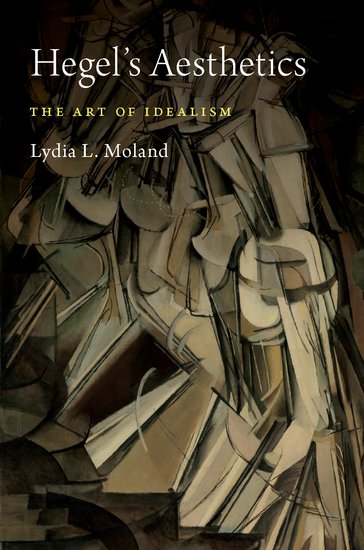 We are pleased to announce the release of the book Hegel’s Aesthetics. The Art of Idealism by Lydia L. Moland (Oxford University Press, 2019).

Hegel is known as “the father of art history,” yet recent scholarship has overlooked his contributions. This is the first comprehensive interpretation of Hegel’s philosophy of art in English in thirty years. In a new analysis of Hegel’s notorious “end of art” thesis, Hegel’s Aesthetics shows the indispensability of Hegel’s aesthetics for understanding his philosophical idealism and introduces a new claim about his account of aesthetic experience.

In a departure from previous interpretations, Lydia Moland argues for considering Hegel’s discussion of individual arts—architecture, sculpture, painting, music, and poetry—on their own terms, unlocking new insights about his theories of perception, feeling, selfhood, and freedom. This new approach allows Hegel’s philosophy to engage with modern aesthetic theories and opens new possibilities for applying Hegel’s aesthetics to contemporary art. Moland further elucidates his controversial analysis of symbolic, classical, and romantic art through clarifying Hegel’s examples of each. By incorporating newly available sources from Hegel’s lectures on art, this book widely expands our understanding of the particular artworks Hegel discusses as well as the theories he rejects. Hegel’s Aesthetics further situates his arguments in the intense philosophizing about art among his contemporaries, including Kant, Lessing, Herder, Schelling, and the Schlegel brothers.

Ultimately, the book offers a rich vision of the foundation of his ideas about art and the range of their application, confirming Hegel as one of the most important theorists of art in the history of philosophy.