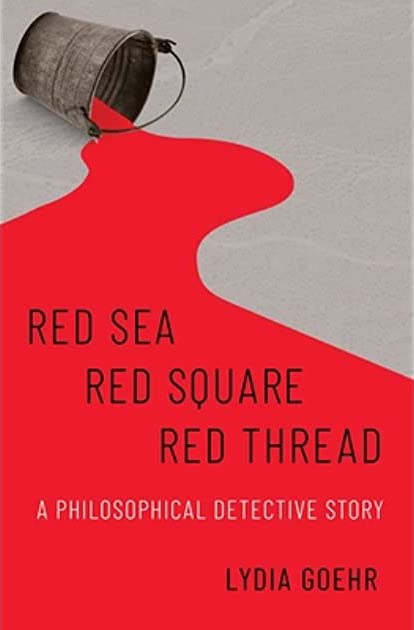 A profoundly original philosophical detective story tracing the surprising history of an anecdote ranging across centuries of traditions, disciplines, and ideas

Red Sea-Red Square-Red Thread is a work of passages taken, written, painted, and sung. It offers a genealogy of liberty through a micrology of wit. It follows the long history of a short anecdote. Commissioned to depict the biblical passage through the Red Sea, a painter covered over a surface with red paint, explaining thereafter that the Israelites had already crossed over and that the Egyptians were drowned. Clearly, not all you see is all you get. Who was the painter and who the first teller of the tale?

Designed as a philosophical detective story, Red Sea-Red Square-Red Thread follows the extraordinary number of thinkers and artists who have used the Red Sea anecdote to make so much more than a merely anecdotal point. Leading the large cast are the philosophers, Arthur Danto and Søren Kierkegaard, the poet and playwright, Henri Murger, the opera composer, Giacomo Puccini, and the painter and print-maker, William Hogarth. Strange companions perhaps, until their use of the anecdote is shown as working its extraordinary passage through so many cosmopolitan cities of art and capital. What about the anecdote brings Danto’s philosophy of art into conversation with Kierkegaard’s stages on life’s way, with Murger and Puccini’s la vie de bohème, and with Hogarth’s modern moral pictures?

The book explores narratives of emancipation in philosophy, theology, politics, and the arts. What has the passage of the Israelites to do with the Egyptians who, by many gypsy names, came to be branded as bohemians when arriving in France from the German lands of Bohemia? What have Moses and monotheism to do with the history of monism and the monochrome? And what sort of thread connects a sea to a square when each is so purposefully named red?

Below you can find the Table of Contents:

Preface
1. Thought Experiment
2. Emancipation Narrative
3. From Sea to Square to Sea
4. Passages of Bohème
5. Testament and Table
6. Contesting Opera
7. Sea Scenes
8. Between Fact and Fiction
9. Refiguring Exodus
10. Bohemia-Bohemian-Bohème
11. Egyptian-Jewish Bohème
12. Mastering The Cant In The Cafe of Complaint
13. Reds of Art and War
14. Grey Days for a Gay Science
15. Proverbs on the Path to the Absolute
16. Thought Experiments in Color
17. Red Thread
18. Painter of Moods and Professions
19. Street Signs of Libation and Liberation
20. Spreading The Anecdote
21. Tying The Knot