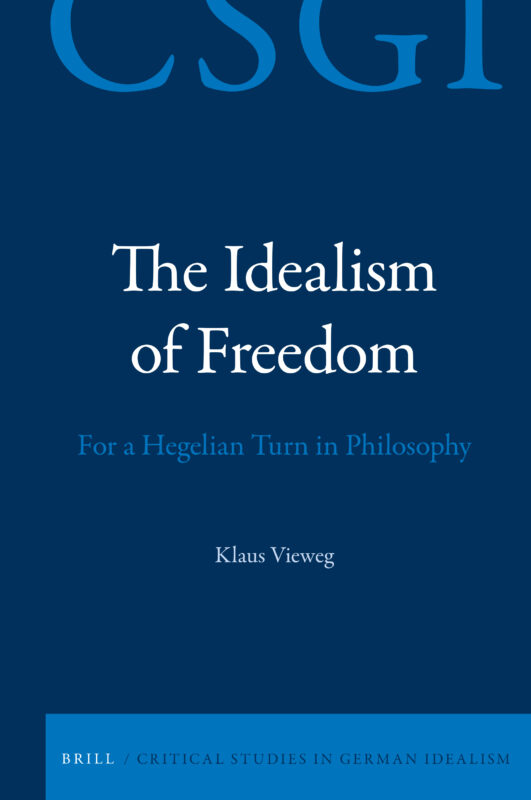 We are pleased to give notice of the release of the book The Idealism of Freedom, by Klaus Vieweg (Brill, 2020).

In The Idealism of Freedom, Klaus Vieweg argues for a Hegelian turn in philosophy. Hegel’s idealism of freedom contains a number of epoch-making ideas that articulate a new understanding of freedom, which still shape contemporary philosophy. Hegel establishes a modern logic, as well as the idea of a social state. With his distinction between civil society and the state he makes an innovative contribution to political philosophy. Hegel defends the idea of freedom for all in a modern society and is a sharp critic of every nationalism and racism. Vieweg’s study introduces these ideas into perspectives on freedom in contemporary philosophy.

Here the table of contents:

I. On the Fundament of Hegel’s Philosophy

1. Hegel’s Adventures in Wonderland, or the Beginning of Philosophy

3. The “Reversal of Consciousness Itself”: Along the Path of the Phenomenology of Spirit

4. Pyrrho and the Wisdom of the Animals: Hegel on Scepticism

5. Hegel’s Theory of Free Will

7. Care and Forethought: The Idea of Substantiality in Hegel’s Practical Philosophy

9. Beyond Wall Street: Hegel as Founder of the Concept of Welfare State

10. The State and its Logical Foundations

11. The Right of Resistance

III. Hegel on Art and Religion

12. Hegel’s Conception of the Imagination

13. The World Turned Upside Down

16. The East and Buddhism