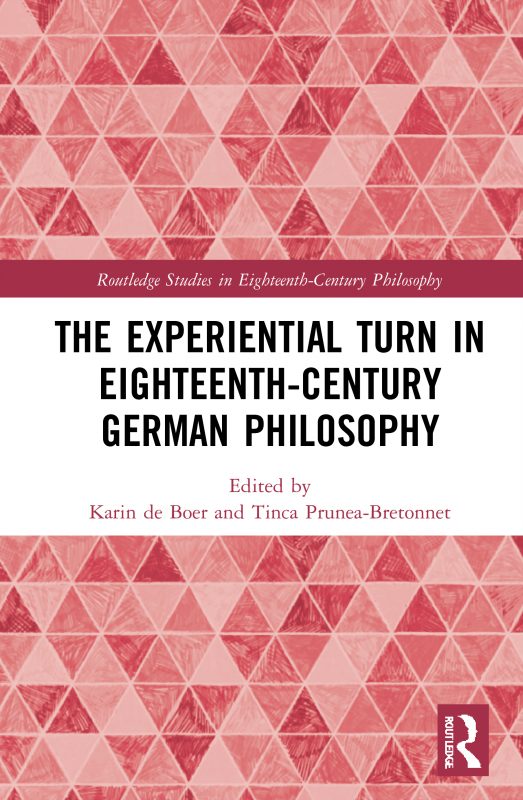 We are glad to give notice of the release of the volume The Experiential Turn in Eighteenth-Century German Philosophy edited by Karin de Boer and Tinca Prunea-Bretonnet (Routledge, 2021).

This collection of essays challenges the prevailing assumption that eighteenth-century German philosophy prior to Kant was largely defined by post-Leibnizian rationalism and, accordingly, a low esteem of the cognitive function of the senses. It does so by highlighting the various ways in which eighteenth-century German philosophers reconceived the notion and role of experience in their efforts to identify, defend, and contest the contribution of sensibility to disciplines such as metaphysics, theology, the natural sciences, psychology, and aesthetics. Engaging in depth with Tschirnhaus, Wolff, the Wolffians, eclecticism, Popularphilosophie, the Berlin Academy, Tetens, and Kant, its thirteen chapters present a more nuanced understanding of the German reception of British and French ideas and dismiss the prevailing view that German philosophy was largely isolated from European debates. Moreover, the book introduces a number of relatively unknown, but highly relevant philosophers and developments to non-specialized scholars and contributes to a better understanding of the richness and complexity of the German Enlightenment.

Part I. Wolff and Wolffianism

1. Before and Beyond Leibniz: Tschirnhaus and Wolff on Experience and Method, Corey W. Dyck

2. The Role of Experience in Wolff’s General Cosmology, Christian Leduc

7. Contingency and Experience in Maupertuis’s Essay on Cosmology, Anne-Lise Rey

8. The Role of Reason, Experience, and Physiology in J.H.S. Formey’s Essay on Dreams, Annelie Grosse

10. On the Mitigated Phenomenalism of J.-B. Merian, Tinca Prunea-Bretonnet

11. The Role of Experience in Kant’s Prize Essay, Courtney Fugate

12. Tetens on the Nature of Experience: Between Empiricism and Rationalism, Clinton Tolley and R. Brian Tracz