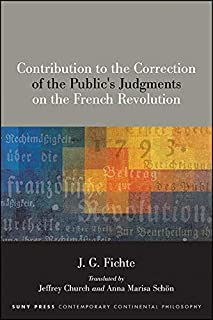 We are glad to give notice of the release of J. G. Fichte‘s Contribution to the Correction of the Public’s Judgments on the French Revolution. edited and translated by Jeffrey Church and Anna Marisa Schön (SUNY, 2021).

First translation into English of Fichte’s major work on the French Revolution.

The reception history of the French Revolution in France and England is well documented among Anglophone scholars; however, the debate over the Revolution in Germany is much less well known. Fichte’s Contribution played an important role in this debate. Presented here for the first time in English, Fichte’s work provides a distinctive synthesis of Locke’s “possessive individualism,” Rousseau’s general will, and Kant’s moral philosophy. This eclectic blend results in an unusual rights theory that at times veers close to a form of anarchism. Written in 1792–93, just before Fichte moved to Jena to develop his philosophical system in a series of works—above all the Wissenschaftslehre of 1794—the Contribution provides invaluable insight into Fichte’s early development. In addition, Fichte’s work predates much of Kant’s political philosophy, and can shed light on the rich dialogue in German political thought in the 1790s.