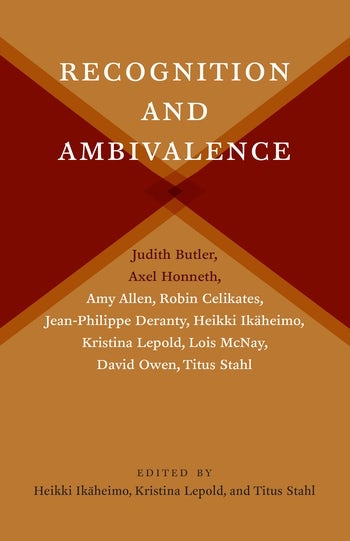 We are glad to give notice of the book Recognition and Ambivalence edited by Heikki Ikäheimo, Kristina Lepold, and Titus Stahl (Columbia University Press, 2021).

Recognition is one of the most debated concepts in contemporary social and political thought. Its proponents, such as Axel Honneth, hold that to be recognized by others is a basic human need that is central to forming an identity, and the denial of recognition deprives individuals and communities of something essential for their flourishing. Yet critics including Judith Butler have questioned whether recognition is implicated in structures of domination, arguing that the desire to be recognized can motivative individuals to accept their assigned place in the social order by conforming to oppressive norms or obeying repressive institutions. Is there a way to break this impasse?

Recognition and Ambivalence brings together leading scholars in social and political philosophy to develop new perspectives on recognition and its role in social life. It begins with a debate between Honneth and Butler, the first sustained engagement between these two major thinkers on this subject. Contributions from both proponents and critics of theories of recognition further reflect upon and clarify the problems and challenges involved in theorizing the concept and its normative desirability. Together, they explore different routes toward a critical theory of recognition, departing from wholly positive or negative views to ask whether it is an essentially ambivalent phenomenon. Featuring original, systematic work in the philosophy of recognition, this book also provides a useful orientation to the key debates on this important topic.

Introduction, by Heikki Ikäheimo, Kristina Lepold, and Titus Stahl
1. Recognition Between Power and Normativity: A Hegelian Critique of Judith Butler, by Axel Honneth
2. Recognition and the Social Bond: A Response to Axel Honneth, by Judith Butler
3. Intelligibility and Authority in Recognition: A Reply, by Axel Honneth
4. Recognition and Mediation: A Second Reply to Axel Honneth, by Judith Butler
5. Historicizing Recognition: From Ontology to Teleology, by Lois McNay
6. Recognizing Ambivalence: Honneth, Butler, and Philosophical Anthropology, by Amy Allen
7. How Should We Understand the Ambivalence of Recognition? Revisiting the Link Between Recognition and Subjection in the Works of Althusser and Butler, by Kristina Lepold
8. Recognition, Constitutive Domination, and Emancipation, by Titus Stahl
9. Return to Reification: An Attempt at Systematization, by Heikki Ikäheimo
10. Negativity in Recognition: Post-Freudian Legacies in Contemporary Critical Theory, by Jean-Philippe Deranty
11. Beyond Needs: Recognition, Conflict, and the Limits of Institutionalization, by Robin Celikates
12. Freedom, Equality, and Struggles of Recognition: Tully, Rancière, and the Agonistic Re-Orientation, by David Owen
Contributors
Index