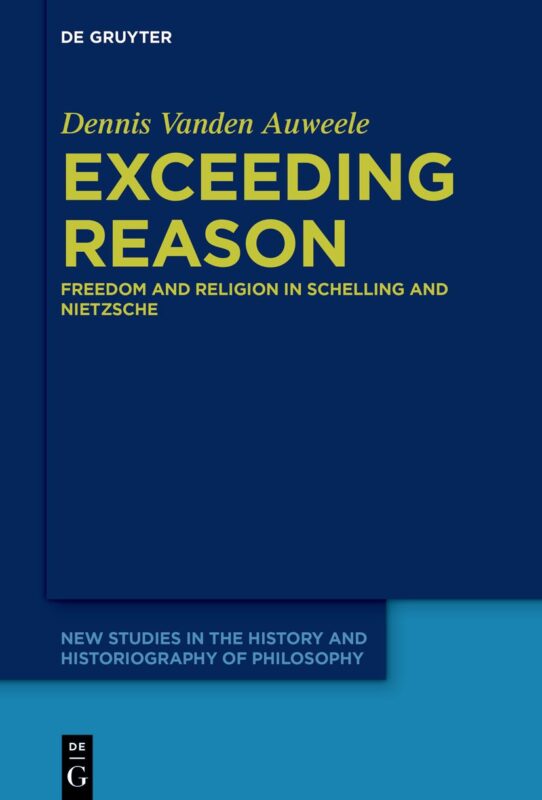 We are very glad to give notice of the release of the book Exceeding Reason. Freedom and Religion in Schelling and Nietzsche by Dennis Vanden Auweele (De Gruyter, 2020).

The work of the later Schelling (in and after 1809) seems antithetical to that of Nietzsche: one a Romantic, idealist and Christian, the other Dionysian, anti-idealist and anti-Christian. Still, there is a very meaningful and educative dialogue to be found between Schelling and Nietzsche on the topics of reason, freedom and religion. Both of them start their philosophy with a similar critique of the Western tradition, which to them is overly dualist, rationalist and anti-organic (metaphysically, ethically, religiously, politically). In response, they hope to inculcate a more lively view of reality in which a new understanding of freedom takes center stage. This freedom can be revealed and strengthened through a proper approach to religion, one that neither disconnects from nor subordinates religion to reason. Religion is the dialogical other to reason, one that refreshes and animates our attempts to navigate the world autonomously. In doing so, Schelling and Nietzsche open up new avenues of thinking about (the relationship between) freedom, reason and religion.

1. Schelling and Nietzsche: A Philosophical Discussion?

3. Goodness, Evil and the Tradition

5. Living Nature and Freedom in Schelling

6. Culture, Style and Sovereignity in Nietzsche

8. The Revealed: On Myth, Monotheism and Philosophical Religion