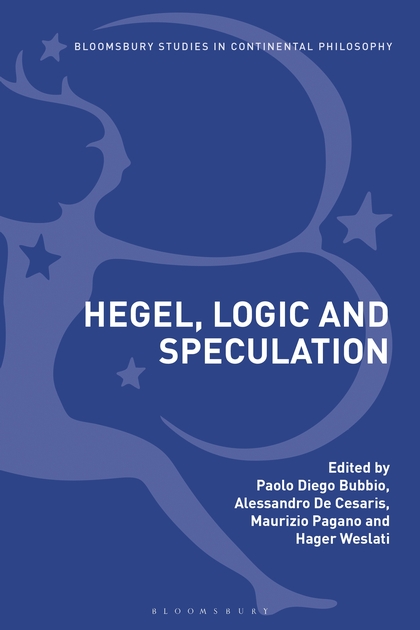 We are glad to give notice of the release of the book Hegel, Logic and Speculation, edited by Diego Bubbio, Alessandro De Cesaris, Maurizio Pagano, Hager Weslati (Bloomsbury, 2019).

This book offers new critical perspectives on the relationship between the notions of speculation, logic and reality in Hegel’s thought as basis for his philosophical account of nature, history, spirit and human experience. The systematic functions of logic and pure thought are explored in their concrete forms and processual progression from subjective spirit to philosophy of right, society, the notion of habit, the idea of work, art, religion and science. Engaging the relation between the Logic and its realisations, this book shows the internal tension that inhabits Hegel’s philosophy at the intersection of logical (conceptual) speculation and concrete (interpretative) analysis. The investigation of this tension allows for a hermeneutical approach that demystifies the common view of Hegel’s idealism as a form of abstract thought, while allowing for a new assessment of the importance of speculation for a concrete understanding of the world.
For further information, please visit Bloomsbury’s website.
Printable Version