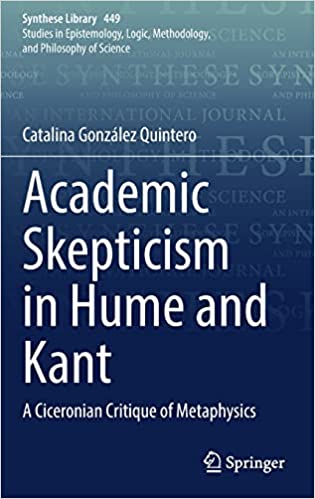 We are very pleased to give notice of the new volume Academic Skepticism in Hume and Kant. A Ciceronian Critique of Metaphysics by Catalina González Quintero (Springer 2022).

This book offers an unprecedented study of the influence of the skepticism of the New Platonic Academy on David Hume’s and Immanuel Kant’s critiques of metaphysics. By demonstrating how the skeptical teachings of the Academy affected these authors’ Enlightened attacks on traditional metaphysics, this book deepens and broadens the burgeoning scholarship on the role that the Ancients schools of skepticism played in the configuration of Modern skeptical outlooks. It bolsters the newfound recognition that we must reconsider the conventional view that the revival of Pyrrhonism in the sixteenth and seventeenth centuries gave birth to Modern skepticism by incorporating the influence of Academic skepticism in the analysis.

Giving a new impetus to this line of research, the author argues that Academic ideas and methods informed Hume’s and Kant’s critique of metaphysics in substantial and thus far unacknowledged ways. Specifically, she demonstrates the centrality of Academic skepticism to Hume’s epistemology and critique of religion through a detailed analysis of his theory of belief in the Treatise and the first Enquiry as well as of its application in the Dialogues concerning Natural Religion. Likewise, her analysis reveals how Kant’s anti-metaphysical stance, developed in the Transcendental Dialectic of the Critique of Pure Reason, contains many skeptical insights of Academic inspiration, bequeathed to him by Hume.

Below you can download the Table of Contents of the volume.