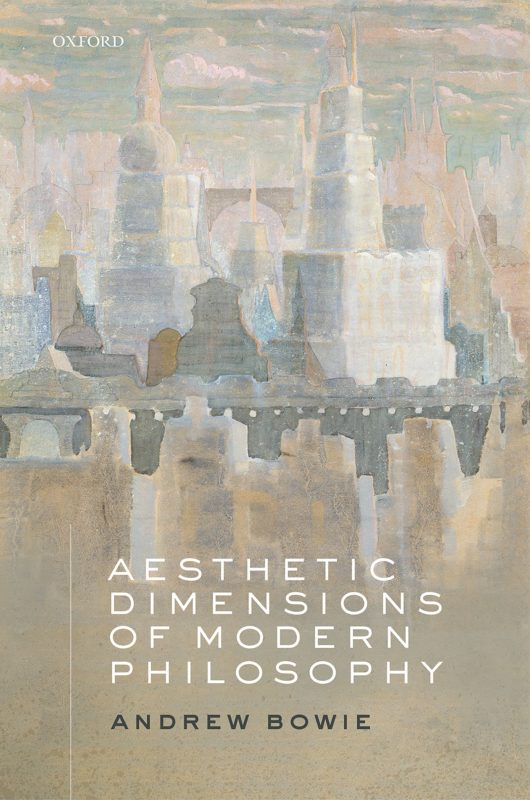 We are glad to give notice of the new book Aesthetic Dimensions of Modern Philosophy, by Andrew Bowie (Oxford University Press, 2022).

Much of contemporary philosophy, especially in the analytical tradition, regards aesthetics as of lesser significance than epistemology, ethics, metaphysics, and the philosophy of language. In Aesthetic Dimensions of Modern Philosophy Andrew Bowie, in contrast, explores the idea that art and aesthetics have crucial implications for those areas of philosophy. In the modern period, the growth of warranted scientific knowledge is accompanied both by heightened concern with epistemological scepticism and by a new philosophical attention to art and the beauty of nature. This suggests that modernity involves problems concerning how human beings make sense of the world that go beyond questions of knowledge, and are reflected in the arts. The relationship of art to philosophy is explored in Montaigne, Descartes, Hume, Kant, Schelling, the early German Romantics, and Hegel. The book then considers Cassirer’s and the hermeneutic tradition’s exploration of close links between meaning in language and in art. The work of Karl Polanyi, Marx, Nietzsche, Heidegger, Adorno, Dewey, and others is used to investigate how the modern sciences and the development of capitalism change both humankind’s relations to nature and the nature of value, and so affect the role of art in human self-understanding. The aesthetic dimensions of modern philosophy help to uncover often neglected historical shifts in how ‘subjective’ and ‘objective’ are conceived. Seeing art as a kind of philosophy, and philosophy as a kind of art reveals unresolved tensions between the different cultural domains of the modern world, and questions some of the orientation of contemporary philosophy.