We are very pleased to announce the release of the volume Vital Forces, Teleology and Organization. Philosophy of Nature and the Rise of Biology in Germany, by Andrea Gambarotto (Springer, 2017). 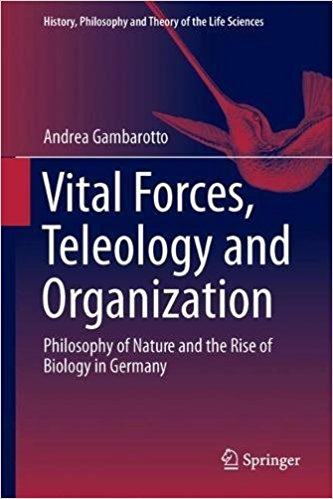 This book offers a comprehensive account of vitalism and the Romantic philosophy of nature. The author explores the rise of biology as a unified science in Germany by reconstructing the history of the notion of “vital force,” starting from the mid-eighteenth through the early nineteenth century. Further, he argues that Romantic Naturphilosophie played a crucial role in the rise of biology in Germany, especially thanks to its treatment of teleology. In fact, both post-Kantian philosophers and naturalists were guided by teleological principles in defining the object of biological research.

The book begins by considering the problem of generation, focusing on the debate over the notion of “formative force.” Readers are invited to engage with the epistemological status of this formative force, i.e. the question of the principle behind organization. The second chapter provides a reconstruction of the physiology of vital forces as it was elaborated in the mid- to late-eighteenth century by the group of physicians and naturalists known as the “Göttingen School.” Readers are shown how these authors developed an understanding of the animal kingdom as a graded series of organisms with increasing functional complexity.

Chapter three tracks the development of such framework in Romantic Naturphilosophie. The author introduces the reader to the problem of classification, showing how Romantic philosophers of nature regarded classification as articulated by a unified plan that connects all living forms with one another, relying on the idea of living nature as a universal organism. In the closing chapter, this analysis shows how the three instances of pre-biological discourse on living beings – theory of generation, physiology and natural history – converged to form the consolidated disciplinary matrix of a general biology.

The book offers an insightful read for all scholars interested in classical German philosophy, especially those researching the philosophy of nature, as well as the history and philosophy of biology.

The Introduction of the book can be read by clicking here.