We are pleased to announce the publication of Hegel on Recollection: Essays on the Concept of Erinnerung in Hegel’s System, edited by Valentina Ricci and Federico Sanguinetti (Cambridge Scholars Publishing).
We submit a short announcement of the book from the back cover, the complete Introduction and the Table of Contents. 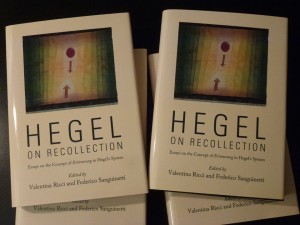 The philosophy of G.W.F. Hegel is certainly one of the richest and most complex philosophical endeavours in the history of Western thought. Hegelian scholars have either tried to make sense of its individual parts through detailed analyses, or to offer a comprehensive interpretation of the system as a whole. Attempts to combine these two approaches have often appealed to some key-concepts, such as historicity, recognition, dialectic, and Aufhebung, or to a combination of these concepts, in order to develop consistent interpretations of the different components of the system. This book lays the foundation for a similar interpretive project by focusing on Hegel’s concept of recollection (Erinnerung). This collection of essays provides a detailed examination of the role played by recollection within the different spheres of the system, while at the same time acknowledging the specific character of its different instances. This undertaking is guided by the idea that the relationship between the different instances examined here constitutes a privileged key to the interpretation of Hegel’s philosophy and allows a deeper understanding of some of its essential speculative moments.

“This volume is a comprehensive study of the concept of recollection in Hegel’s works, stretching from the early Jugendschriften to the lecture cycles on the philosophy of history, the arts, religion and the history of philosophy. The individual contributions highlight the broader methodological role of recollection as interiorization/appropriation and its narrower meaning as representational memory in the Philosophy of Subjective Spirit. All contributions are expertly informed, analytically perceptive and refreshing in their interpretations. Reading them leaves no doubt about the centrality of recollection as interiorization for Hegel’s entire philosophical project. An inspired and inspiring contribution to Hegel scholarship!”

“The notion of Erinnerung in Hegel is key to his philosophy. The collection put out by Valentina Ricci and Federico Sanguinetti fills a gap in the literature by bringing together several essays by young scholars on a variety of issues in Hegel’s philosophy, from logic and history to psychology, aesthetics and religion. It is a timely achievement that I trust will be acknowledged as important and fruitful and be met with gratitude by a wide audience of readers interested in Hegel and the history of philosophy.”

“This excellent volume […] innovates the Hegelian scholarship from within its tradition. This group of young scholars carries out a thorough and extensive discussion of recollection, a category that traverses the whole of Hegel’s works as a common thread. The challenging pages on the logic and on absolute knowing intertwine with the insights provided by poetry, religion, and history of philosophy. There emerges a framework including accurate discussions of Hegel’s anthropology, phenomenology, and psychology, which provides a decisively original contribution to the field of Hegel studies.”

See the publisher’s page for the book here. Read the Introduction here and the Table of Contents here.