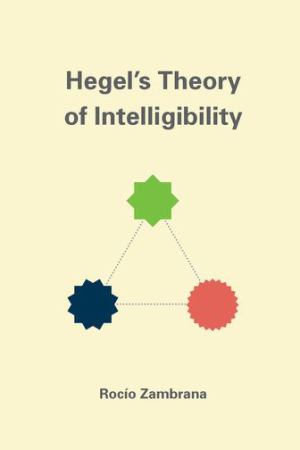 We are glad to announce that Rocìo Zambrana’s book Hegel’s Theory of Intelligibility (University of Chicago Press, 2015) is out.

The book is an assessment of Hegel’s Science of Logic aimed at overcoming the divisions that have animated contemporary critics, namely dividing them between “post-Kantian” (Robert Pippin) and strictly ontological (Stephen Houlgate) readers.

The book takes its move from Pippin’s intuition that the Logic (and Hegel’s philosophy in general) “seems to inherit the ‘apperception theme’ in Kant” (p. 8), in opposition to straightforward “ontological” readings of the Logic. The author aims though at radicalising Pippin’s undertaking of Hegel, by suggesting a new interpretation of the notion of Wirklichkeit (Actuality) in the light of insights that Pippin only poses in its later works.

In particular, Zambrana aims at assessing the notion of Wirklichkeit in terms of reflexivity, so that Hegel’s approach would result in a shift of Kant’s concern with “trascendental conditions” towards a “theory of the historical development of norms, one that supports a theory of radical conceptual change” (p. 8). From this new perspective, combined with the assumption that the concluding section of the Doctrine of Essence is key to the Logic as a whole, Zambrana can thus present Hegel’s Science of Logic as the study of reason’s self-sufficiency, as though constantly declined with reference to the historical conditions of its manifestation.

Zambrana’s “anti-metaphysical” approach to Hegel’s philosophy is therefore enhanced with a re-evaluation of the Hegelian notion of negativity with relation to intelligibility. For the author, intelligibility in Hegel has the form of negativity and is therefore constantly linked to a process of calling into question all forms of “metaphysical” authority. In characterising intelligibility as such, Hegel embarks in presenting it in terms of fragile normative practices and institutions, which he acknowledges as subject to constant change. In Zambrana’s assessment Hegel thus turns out to be even more of a modernist than Pippin had envisaged.

For a better detailed review of R. Zambrana’s book, we refer to Paul Redding’s, written for the Notre Dame Philosophical Reviews.