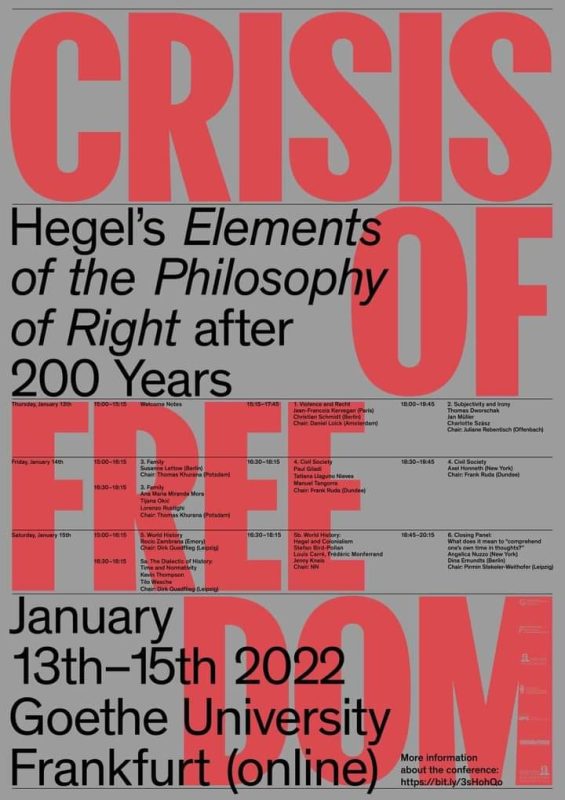 We are glad to give notice that the International interdisciplinary Conference The Crisis of Freedom: Hegel’s Elements of the Philosophy of Right after 200 Years, hosted by the Goethe University Frankfurt (Guest house of the University and online), will take place on 13th-15th January, 2022. Originally planned for the occasion of the 200th anniversary of the first publication of Hegel’s Elements of the Philosophy of Right in 2020, the conference is also the annual conference of the Frankfurt Humanities Research Center (Forschungszentrum Historische Geisteswissenschaften, FZHG).

Below you can find the presentation of the event. For further information contact hegelfrankfurt2021@gmail.com, or visit the conference page.

The object of Hegel’s Elements is “das Recht”. Hegel understands Recht to be nothing else (and nothing less) than the actuality of freedom: freedom that has become actual, that is, freedom that has actualized itself. In this sense, Recht comprises all of (social) actuality which can in turn be understood as the medium and presentation of freedom. Hegel’s Elements is a theory of freedom and a theory of social actuality in one.

Since the publication of Hegel’s Elements, this unity of theory of freedom and theory of (social) actuality has been understood as an apologetic program. This understanding was decisively influenced by Hegel’s positioning in the political struggles of his time. After Hegel, the critique of this reactionary positioning has fueled the program to go back behind Hegel. Hence, a (normative) theory of freedom was played off against a (realistic) theory of social and political reality in order to thereby regain the possibility of critique. Yet this reaction forfeits the specific form of critique that Hegel’s program of a conceptual unity of freedom and social actuality opens up. For Hegel’s program is critical not because it asserts the claims of freedom against (bad) actuality or the claims of actuality against (false) freedom but rather through the mode in which it demonstrates the unity of freedom and actuality: it is critical through the mode of its presentation (Darstellung). Since it shows that the unity of freedom and actuality only exists as a process – and that this process consists in the bringing forth of the tensions and contradictions in which the attempts to actualize this unity become necessarily entangled. Hegel’s Elements is thus critical as an exposition of crises: Its argument moves from one to the next form of right by showing and exacerbating the crisis in which every form of law is caught up precisely because (or insofar as) it is a step in the actualization of freedom. The exposition of crises does thus not only have a diagnostic but a strategic, argumentative significance in Hegel’s philosophy of right.

Held in co-operation between the Institute of Philosophy and the Research Center “Normative Orders” at Goethe University, the conference brings together distinguished experts and early career scholars from philosophy, law, sociology, political science and history as well as other disciplines, focusing on the crises developed in Hegel’s Elements: the crises of abstract right, morality, family, civil society, and the state that are each crises of the attempt to actualize freedom in these specific forms. In doing so, the conference aims at the investigation of a twofold problem: on the one hand, the question of the conceptual, logical structure of Hegel’s theory of freedom and, on the other, the question of the diagnostic, social theoretical content of his analyses of the respective forms of right.