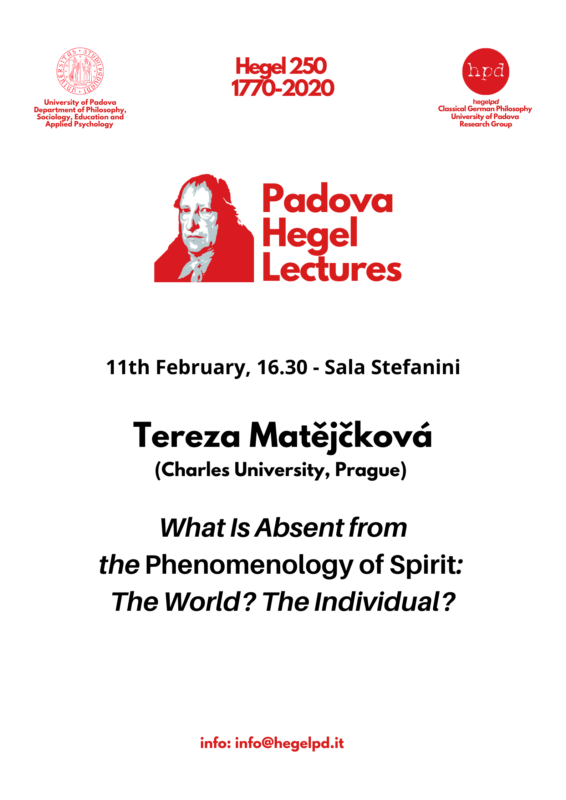 In order to celebrate the 250th anniversary of Hegel’s birth, hegelpd launches the Padova Hegel Lectures: the series consists of 13 lectures given by international Hegel scholars, aimed at exploring Hegelian philosophy as a whole, investigating its main insights as well as its relevance for contemporary concerns.

We are very glad to announce that the first lecture will be given by Tereza Matějčková (Charles University, Prague). The title of the lecture is What Is Absent from the Phenomenology of Spirit: The World? The Individual?. The lecture will take place at the University of Padova on 11th February, 2020.

Two things have been critically levelled against Hegel’s Phenomenology: that the world disappears in an all-encompassing spirit, and that, with this, individuality is destroyed too. As to the first criticism, I will claim that it is unfounded. The second objection does have some justification; yet I will claim that the ambivalent status of individuality is the very reason why Hegel is an interesting author, especially today.

In the lecture, I will accept the hypothesis that the Phenomenology can be read as a Bildungsroman. Against traditional interpretations, I aver that it is not the consciousness that “builds itself up”; instead, the reader witnesses a gradual crystallization of a specific world-order. In my lecture, I will focus on the concept of “world,” arguing that, for Hegel, world is a model of reality, an attempt to capture reality and devise a plan for its understanding. I will schematically present the dominant world-pictures implicit at individual levels of the Phenomenology: the world-picture devised by consciousness, self-consciousness, reason, objective, and subjective spirit. Eventually, these world-picture fail in their function as appropriate or justified models of reality which means that they lead to epistemological, moral, or practical failures.

Absolute knowledge is a level of knowing that enables a world-conception that captures reality in the most appropriate manner. This world, based on the recognition of finitude and plurality as constitutive principles of reality, can be considered the world of modern society. Yet despite the appreciation of finitude, Hegel’s conception of individuality remains ambiguous. In fact, individuality is not part of society; modern society is made up not of individuals but of supra-individual communication. This denigration of individuality has often been considered Hegel’s failure. Yet, the very fact that individuality is excluded from society is Hegel’s original insight that can appear as enlightening especially today when the intuition, that individuals can just “walk into” society and change it, appears naïve.