We are very pleased to announce that the International Conference Marx 2.0 – A Symposium will take place at the UNSW in Sydney, on February 22-23 2018.

You can find the complete program of the conference below.

200 years after his birth Karl Marx is again the object of intensive engagement among scholars, theorists and activists. Since the last major wave of Marx-reception, after the end of the last cold war and the fall of state sponsored Marxist-Leninist orthodoxy, many things have changed. Marx’s name is no-more immediately associated with one side of a confrontation between two world-powers both seeking global domination, a situation in which strategic considerations often crowded out meticulous thought. Also, despite Marx’s own self-understanding he is nowadays increasingly read as a social and political philosopher, even if certainly of a very critical kind. The younger generations now read Marx with fresh eyes untainted by the bitterness of those engaged in bygone battles, and the latter (on both sides) have a chance for a new reception of and critical reflection on the theory and philosophy of Karl Marx, its influences, its problems, and its contemporary relevance. ‘Marx 2.0’ brings together philosophers and political theorists from Germany, United States, Canada and Australia, and presents a range of contemporary approaches to Marx’s work and to thinkers closely related to it. 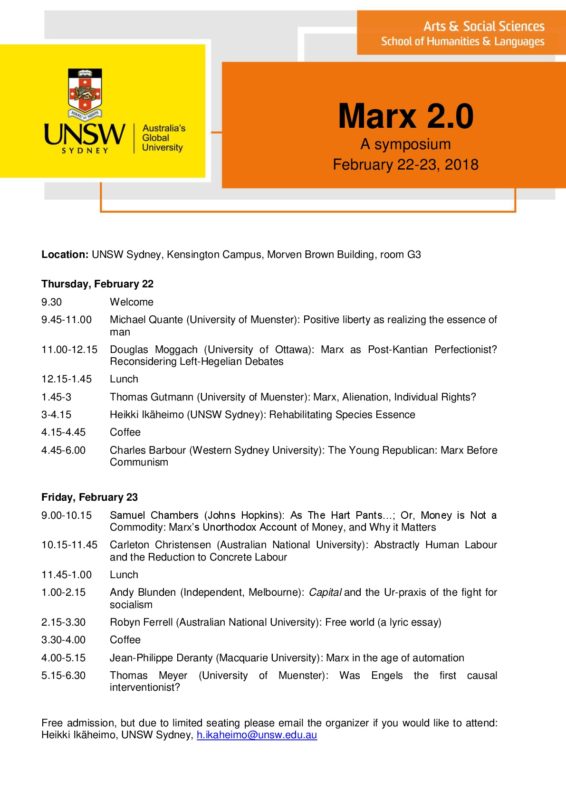 On the occasion of the sixth birthday of hegelpd we have launched the first edition of hegelpd-prize. The prize is …

We are very glad to give notice of the release of the book Antropologia pragmatista. Padova Lectures, by Michael Quante …

In order to celebrate the 250th anniversary of Hegel’s birth, hegelpd launches the Padova Hegel Lectures: the series consists of …