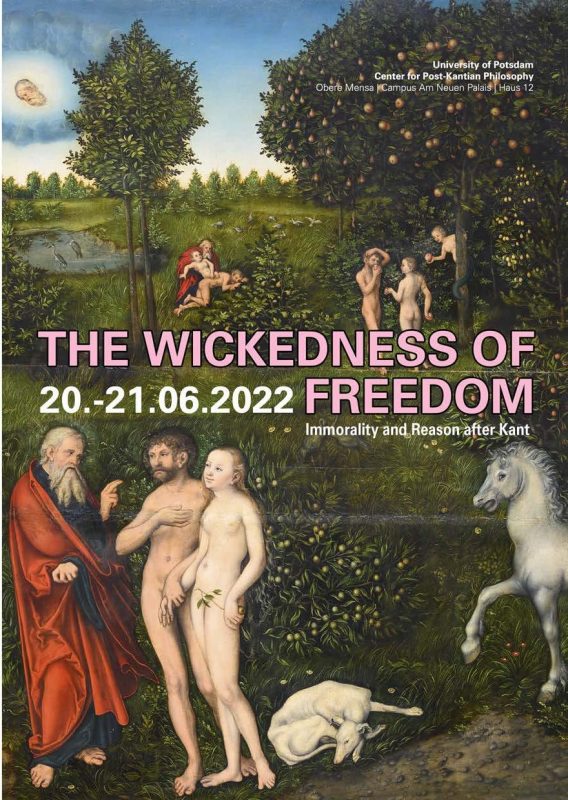 We are glad to announce the conference The Wickedness of Freedom: Immorality and Reason after Kant, which will take place at the University of Potsdam in Obere Mensa, House 12  (Neuen Palais 10, 14469 Potsdam), on June 20-21, 2022.

The conference is organised by the Center for Post-Kantian Philosophy.

Hardly any thought is as defining for the systems and debates of Kantian and post-Kantian philosophy as the thought of the unity of freedom and law. The moral law, Kant teaches, is the law of autonomy; to be truly free is to realize the moral good. Neither Fichte nor Schelling nor Hegel seem to deny the unity of freedom and morality. Thus, it is not surprising if, for example, contemporary ethical constitutivism, according to which moral norms are grounded in the nature of rational, and therein free, agency, refers not only to Kant but also to other representatives of this epoch. It may therefore be surprising if in central passages of important works of Kantian and post-Kantian philosophy we find, in addition to the idea of the unity of freedom and law, at the same time also the counter-idea: the idea that precisely immorality – its reality, not only its possibility – is in a certain sense constitutive for our freedom and that consequently the free realization of morality and of reason would be impossible without immorality. In his Religion, Kant declares that we humans, the only beings under the moral law whose possibility we can make intelligible to ourselves at all, are morally evil with “subjective necessity”. Although Fichte does not simply adopt this doctrine of radical evil, he nevertheless discusses this idea in his System der Sittenlehre, not without reason, in the section on the “formal conditions of morality”. Hegel, otherwise Kant’s harshest critic, explicitly praises precisely the doctrine of radical evil and seems to radicalize it in the Morality chapter of his Grundlinien der Philosophie des Rechts. And in his Freiheitsschrift, Schelling seeks an alternative between privation theories of evil on the one hand and the Manichean assertion of the positive character of evil on the other precisely in a theory of the “common root” of good and evil. For contemporary ethical constitutivism, freedom is an expression of our rational nature and consists in our being determined by the constitutive norms of rational action, which include those of morality. But the idea that the power of moral normativity could at the same time require in us a freedom from these norms seems to be completely absent from constitutivism – as well as from other contemporary approaches and interpretations of Kantian and post-Kantian philosophy, such as those that are more Wittgensteinian or Aristotelian in spirit, for example.

What is in each case the reason for the counter-idea to the idea of the unity of freedom and law in the representatives of the post-Kantian tradition mentioned above – and those not mentioned? And how are the two thoughts to be reconciled? What challenges arise for the perspectives of contemporary constitutivism and other approaches and interpretations that deny or neglect the counter-idea against the background of the Kantian and post-Kantian arguments? These are only three of the possible questions we want to discuss together at our conference.

Here you can find the conference program.