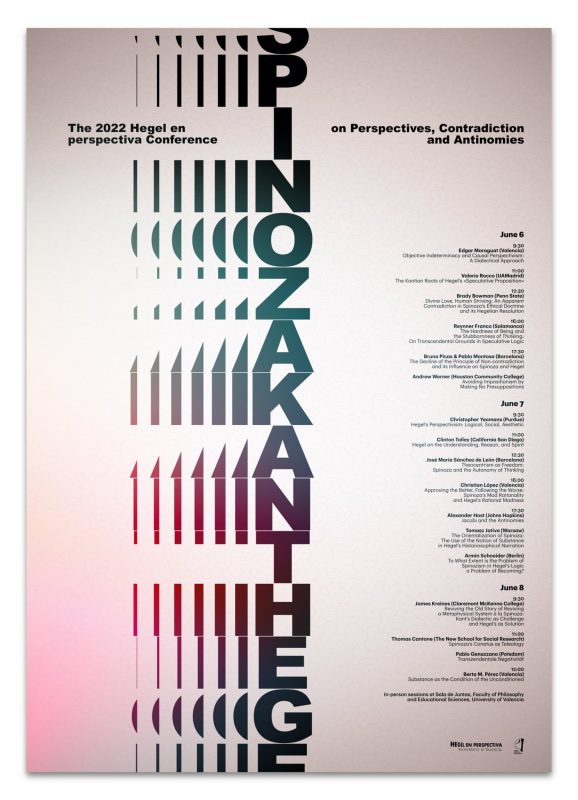 We are glad to give notice of the conference Spinoza, Kant and Hegel on perspectives, contradiction and antinomies, which will take place on June 6-8, 2022 at the University of Valencia. The conference is hosted by the research group Hegel en perspectiva and organised by Edgar Maraguat and Christian López.

Traditionally, two paradigms stand out in the resolution of opposing explanations of reality or what, since Kant’s Critique of Pure Reason, has been called «the antinomy of reason». One of them is perspectivist and considers it possible to admit the validity of differing accounts of entities and events without committing itself to the superiority of one over the other(s), as long as each is fully explanatory in its own right. In this approach, the conflict of explanations is resolved by means of interpretive standpoints attributed to the same subject in different respects. Famously, Hegel ascribes this conceptual strategy to Kant’s solutions of the antinomies, in particular those concerning causality and necessity. However, it is less well known that he also makes Spinoza participate in this perspectivist logic, albeit in a somewhat different sense and with a distinct scope. And then, Hegel counterposes to this logic a less abstract and anti-perspectivist approach, which seeks in contradiction the opportunity for the conceptual superiority of one, and only one, of the explanations to reveal itself.

Although the divergence between the strategies is clear, almost antinomical in itself, perspectivism and Hegelian logic have often been compared and related, sometimes even assimilated. Besides, in the contemporary literature on Kant and Spinoza, effective contradiction has been used to explain the movement of the real. The conference aims to explore the delineation of these alternatives in the philosophy of Spinoza, Kant and Hegel and, in general, the presence in their work of the concepts of perspective and contradiction as conceptual tools to resolve or, at least, to deal somehow with the apparently antinomic character of reason.