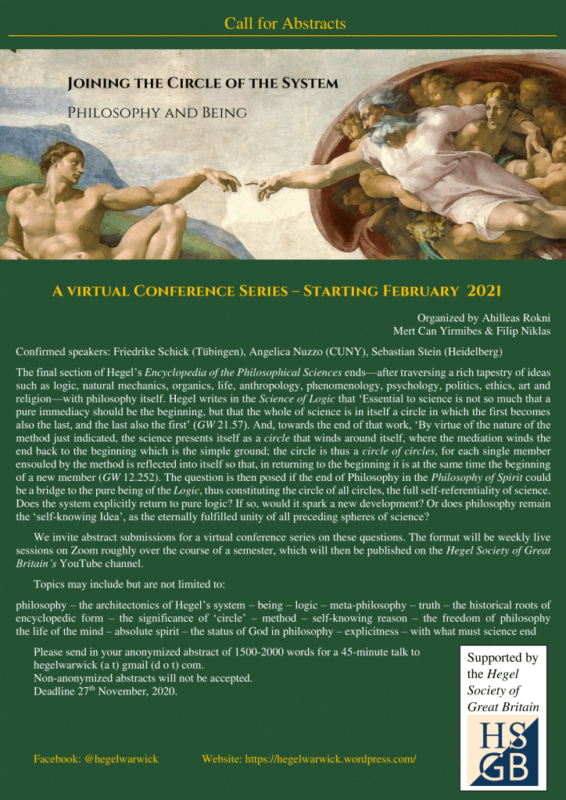 We are pleased to give notice that a Call for Abstracts has been opened for the Virtual Conference Series Joining the circle of the System. Philosophy and Being, which will take place on Zoom, starting February, 2021.

Organized by Ahilleas Rokni, Mert Can Yirmibes and Filip Niklas. Supported by the Hegel Society of Great Britain.

Below you can find the text of the call and the terms for submission.

The final section of Hegel’s Encyclopedia of the Philosophical Sciences ends—after traversing a rich tapestry of ideas such as logic, natural mechanics, organics, life, anthropology, phenomenology, psychology, politics, ethics, art and religion—with philosophy itself. Hegel writes in the Science of Logic that ‘Essential to science is not so much that a pure immediacy should be the beginning, but that the whole of science is in itself a circle in which the first becomes also the last, and the last also the first’ (GW 21.57). And, towards the end of that work, ‘By virtue of the nature of the method just indicated, the science presents itself as a circle that winds around itself, where the mediation winds the end back to the beginning which is the simple ground; the circle is thus a circle of circles, for each single member ensouled by the method is reflected into itself so that, in returning to the beginning it is at the same time the beginning of a new member (GW 12.252). The question is then posed if the end of Philosophy in the Philosophy of Spirit could be a bridge to the pure being of the Logic, thus constituting the circle of all circles, the full self-referentiality of science. Does the system explicitly return to pure logic? If so, would it spark a new development? Or does philosophy remain the ‘self-knowing Idea’, as the eternally fulfilled unity of all preceding spheres of science?

We invite abstract submissions for a virtual conference series on these questions. The format will be weekly live sessions on Zoom roughly over the course of a semester, which will then be published on the Hegel Society of Great Britain’s YouTube channel.

Topics may include but are not limited to:

For more information, please visit the website of the conference series.