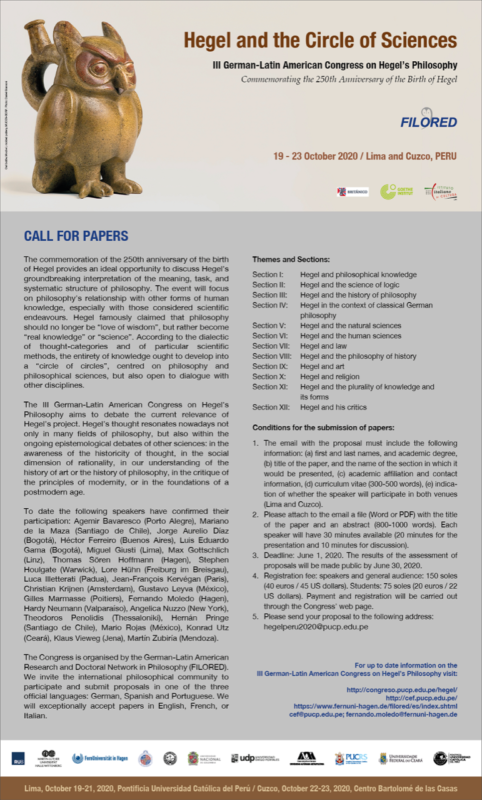 We gladly announce that a Call for Papers has been opened for the 3rd German-Latin American Congress on Hegel’s Philosophy entitled Hegel and the Circle of Sciences that will be held in Peru, on October 19th-23rd, 2020, in the occasion of the 250th Anniversary of the Birth of Hegel.

The Congress is organised by the German-Latin American Research and Doctoral Network in Philosophy (FILORED).

Below you can find the text of the call and the terms for submission. At the following link you can also download the call for paper of the 3rd German-Latin American Hegel Congress.

The commemoration of the 250th anniversary of the birth of Hegel provides an ideal opportunity to discuss Hegel’s groundbreaking interpretation of the meaning, task, and systematic structure of philosophy. The event will focus on philosophy’s relationship with other forms of human endeavours. Hegel famously claimed that philosophy should no longer be “love of wisdom”, but rather become “real knowledge” or “science”. According to the dialectic of thought-categories and of particular scientific methods, the entirety of knowledge ought to develop into a “circle of circles”, centered on philosophy and philosophical sciences, but also open to dialogue with other disciplines.
The III German-Latin American Congress on Hegel’s Philosophy aims to debate the current relevance of Hegel’s project. Hegel’s thought resonates nowadays not only in many fields of philosophy, but also within the ongoing epistemological debates of other sciences: in the awareness of the historicity of thought, in the social dimension of rationality, in our understanding of the history of art or the history of philosophy, in the critique of the principles of modernity, or in the foundations of a postmodern age.

Conditions for the submission of papers:

For up to date information on the III German-Latin American Congress on Hegel’s Philosophy visit: