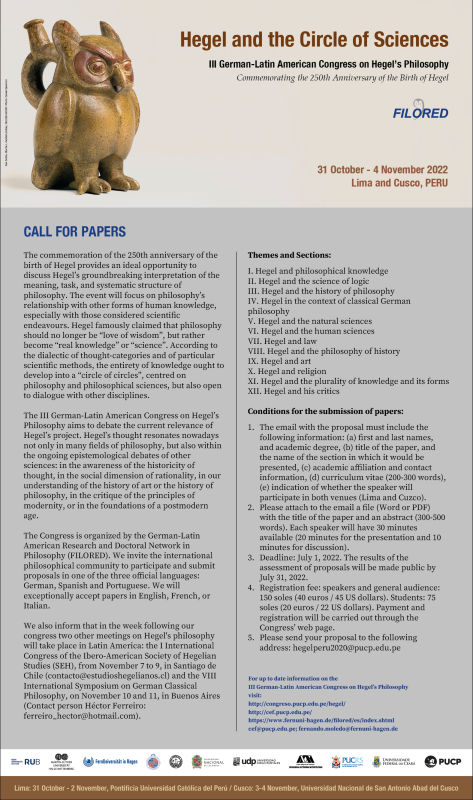 We are glad to give notice that the Call for Papers for the III German-Latin American Congress On Hegel’s Philosophy, Hegel and the Circle of Sciences, which will take place on 31st October – 4 November, 2022, at Pontificia Universidad Católica del Perú, Lima, and Universidad Nacional de San Antonio Abad del Cusco, Cusco, is now opened.

The Congress is organised by the German-Latin American Research and Doctoral Network in Philosophy (FILORED). We invite the international philosophical community to participate and submit proposals in one of the three official languages: German, Spanish and Portuguese.We will exceptionally accept papers in English, French, or Italian.

Conditions for the submission of papers:

1. The email with the proposal must include the following information:
(a) first and last names, and academic degree, (b) title of the paper, and the name of the section in which it would be presented, (c) academic affiliation and contact information, (d) curriculum vitae(200-300 words), (e) indication of whether the speaker will participate in both venues (Lima and Cuzco).
2. Please attach to the email a file (Word or PDF) with the title of the paper and an abstract (300-500 words). Each speaker will have 30 minutes available (20 minutes for the presentation and 10 minutes for discussion).
3. Deadline: July 1, 2022. The results of the assessment of proposals will be made public by July 31, 2022.
4. Registration fee: speakers and general audience 150 soles (40 euros / 45 US dollars). Students: 75 soles (20 euros / 22 US dollars). Payment and
registration will be carried out through the Congress’ web page.
5. Please send your proposal to the following address: hegelperu2020@pucp.edu.pe

The commemoration of the 250th anniversary of the birth of Hegel provides an ideal opportunity to discuss Hegel’s groundbreaking interpretation of the meaning, task, and systematic structure of philosophy. The event will focus on philosophy’s relationship with other forms of human knowledge, especially with those considered scientific endeavours. Hegel famously claimed that philosophy should no longer be “love of wisdom”, but rather become “real knowledge” or “science”. According to the dialectic of thought-categories and of particular scientific methods, the entirety of knowledge ought to develop into a “circle of circles”, centred on philosophy and philosophical sciences, but also open to dialogue with other disciplines.

The III German-Latin American Congress on Hegel’s Philosophy aims to debate the current relevance of Hegel’s project. Hegel’s thought resonates nowadays not only in many fields of philosophy, but also within the ongoing epistemological debates of other sciences: in the awareness of the historicity of thought, in the social dimension of rationality, in our understanding of the history of art or the history of philosophy, in the critique of the principles of modernity, or in the foundations of a postmodern age.