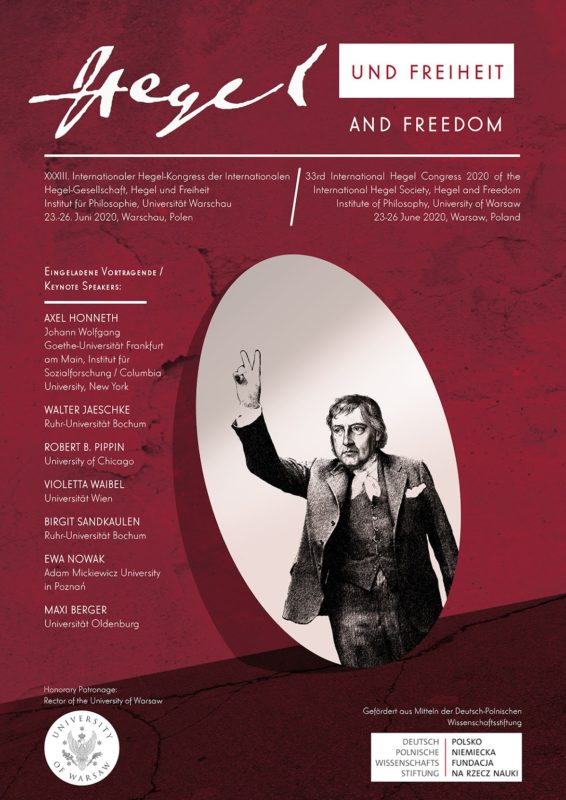 We are pleased to announce the  call for papers for the 33rd International Hegel Congress of the International Hegel Society, that will be held at the University of Warsaw, on June 23rd-26th, 2020. The topic of the congress will be “Hegel and Freedom“.

If you would like to contribute a paper to one of the panels/sessions listed below, please submit an abstract (600-800 characters including spaces) using the form available at this link. Deadline for submission of abstracts: January 31st, 2020.

To attend the conference, please visit the following link.

Below you can find the text of the call, the list of the keynote speakers, the panels of the conference and the terms for submission of abstracts.

In 2020 the international community of Hegel researchers celebrates two anniversaries: on the one hand the 250th birthday of G.W.F. Hegel, on the other hand, the 200th anniversary of the publication of The Philosophy of Right. These two anniversaries provide an excellent opportunity to discuss the main concept of Hegelian philosophy – freedom – in all its aspects. Not only in The Philosophy of Right, but consistently throughout his philosophical work, Hegel describes two moments of human existence as ”most deeply” his ”own”: thinking and freedom. Freedom of the self-consciousness, which already manifests itself as the negative freedom of thinking, able to abstract from all its objects, is described and analysed in Hegel’s philosophy in its various and complex manifestations as: formal-legal, moral, aesthetic, economic, ethical and civic freedom. According to Hegel, each form of freedom has its own right and one of the most important tasks of philosophy is to conceptualise the forms of this right of freedom. The constellations of freedom, right and thinking create the general conceptual framework for the Congress.

The 33rd International Hegel Congress takes place in Warsaw, the capital of Poland – one of the countries where an authoritarian regime was imposed after World War II. Because of a warped reading of Hegel, freedom was declared a mere affirmation of necessity. Because of that, in those times, in Central and Eastern Europe the image of Hegel was distorted, which led to an ideological abuse of his philosophy as one of the pillars of the undemocratic system. Paradoxically, this distorted picture of Hegelian philosophy was empowered by the popularity of Popper’s interpretation of it. Thirty years after the political change in Europe and fifteen years after Poland and many other countries from this region joined the EU, it is high time that the ideologically abused image of Hegel was finally corrected. The idea to focus on Hegel as a freedom thinker aims, therefore, to create an intellectual platform where representatives from West and East, North and South can meet to collectively reflect upon the social, political and legal challenges of our times. The philosophy of Hegel is a fitting starting point for such reflection, above all because it wants to be a philosophy of thinking – that is, rational – freedom. According to this conceptualisation, freedom, both in the individual and collective form, can only be established and maintained if it is inscribed in the extensive network of intersubjective relations, social practices and political institutions. Using the conceptual means of Hegel`s philosophy, we can formulate important and topical questions and, perhaps, also answers, for example on the role of the individual in the context of civil society`s institutions (such as family and corporations), the grounds and boundaries of its economic freedom, its relation to political orders. All this makes the work with the multi-faceted Hegelian theory of freedom an entirely current task, which can and should exceed the purely historical interpretative pattern.

Although at first glance the topic might appeal mainly to those researchers who deal with Hegel’s practical philosophy (his legal and political theory, political and social philosophy, and aesthetics), it is aimed at Hegel’s entire oeuvre. Therefore, we welcome presentations which take up various aspects of Hegel’s understanding of freedom both in his practical and theoretical philosophy. We put important questions up for debate: How is, generally, the relation between freedom and thinking to be understood? What role does the moment of freedom play in the structure of Hegelian logic? What constitutes the freedom of spirit, which seems to function as the inner motor of the successive forms of consciousness and knowledge inside The Phenomenology of Spirit? Is there freedom in nature – the “Other“ of spirit – or is it only in the sphere of culture and Bildung, as its very own element? In what sense can history be understood as the development of the consciousness of freedom? What are the anthropological grounds of human freedom? How does the freedom of the believer and the community of believers express itself within the philosophy of religion? What role does freedom play in the artistic work, according to Hegelian aesthetics? These and the other questions outline the broad fields of the forms of freedom that are revealed in Hegel’s complex work.

In addition to the general questions suggested above, the Congress also aims to discuss the specific, rich tradition of the Polish reception of Hegel’s philosophy, which is indebted to such personalities as Bronisław Trentowski, Karol Libelt or August Cieszkowski. This topic will be addressed in a separate section (held in memory of Marek J. Siemek). As part of it, a discussion will be held, which will explore the grounds and perspectives of the growing interest among young scientists in the potential of Hegelian philosophy.

The official languages of the Congress are English, German and French.

If you would like to contribute a paper to one of the panels/sessions, please submit an abstract (600-800 characters including spaces) using the form available at this link.

Deadline for submission of abstracts: 31 January 2020

Notification of authors: until 2 March 2020

For further information, please visit the website of the event.